Nine years on from the onset of the financial crisis and despite huge efforts and well-intentioned reforms across much of the western world, the global economy remains sluggish. Searching for new ways to boost growth and to counter low inflation, some central banks have decided to cut their key policy rates to below zero. The European Central Bank (ECB) went first in 2014, followed by Denmark, Sweden, Switzerland and Japan. 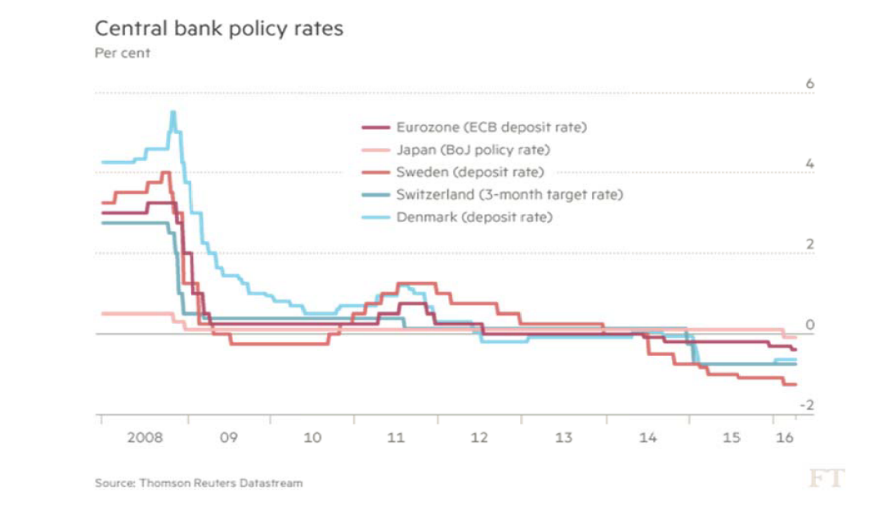 What, How and Why?

The central banks’ decision to adopt the Negative Interest Rate Policy (NIRP) appeared to complement another measure: the zero lower bound (ZLB). At first, hitting the ZLB spurred central banks to engage in quantitative easing (QE). Yet, when that failed to adequately boost the economy, NIRP became the next option.

NIRP is an uncommon tool used by central banks that turns the usual rules of borrowing and lending upside down: Central banks charge banks a fee on the assets they keep with it, depositors have to pay interest to save their money. Negative rates are then supposed to “ripple through economies” by lowering deflation as well as the cost of borrowing; things that should support consumer spending, encourage lending and borrowing and as a consequence raise the economic activity. But can this policy alleviate the banks’ fragility?

According to Benoît Coeuré, member of the executive board of the ECB, “When rates are falling, the value of fixed-income securities on a bank’s balance sheet goes up, leading to higher profits. A decline in the level of interest rates can also boost net interest margins in the short run. Banks carry out maturity transformation by borrowing short term and lending long term. As short-term interest rates fall, funds become cheaper. Since existing fixed-rate loans take some time to reprice to lower rates, the initial impact of lower rates on net interest margins could be positive”.

Is there any point in saving anymore? Once depositors are being charged a negative interest rate on their savings accounts, their likely reaction will be to store cash or to move assets into investments instead of depositing it in the bank. On the other hand, banks attempt to pass the costs of depositing money with central banks to customers and businesses through fees, this is NIRP’s first unexpected result: taking liquidity out of the system. Furthermore, a negative return on deposits with the central bank could prompt banks to invest in riskier assets to secure a return, potentially causing new asset bubbles and risk long term financial stability. A low interest rate environment can increase the credit and equity risk premiums; it could be as well a contributing factor to the volatility on the markets and one of the reasons behind a reduced credit availability. When rates are declining, net interest margins will decrease on the long term while cost of capital increases, which results in a lower profitability for banks. Finally, it seems that NIRP could as well have an impact on exchange rates levels and volatilities.

The psychological factor could also have an adverse impact of the expansionary monetary policies. Reactions resulting from these new policies could be risky and could impact decisions of the different market participants. Individuals’ actions affect their environment causing an endogenous behavioral response from the system. The same applies to financial markets where individuals react to what is happening around them and where the individual actions affect their environment. Endogenous risks resulting from the policy could be difficult to measure.